ABOUT BIG SHOULDERS: THE STORY OF THE RACE

The Big Shoulders 5K Swim: a Lake Michigan-size test of guts, determination and fortitude amidst the chilly, windswept waves. Like all the best races in the world, Big Shoulders started with an inspired individual who had an inspired idea. Founded in 1991 by the late Bill Mulliken, Olympic Gold Medal winner ('60 Rome breaststroke), Big Shoulders has grown to be one of the premier open-water races in the United States.

Mulliken saw the City of Chicago, known for its tough but endearing demeanor, rugged work ethic and soaring skyline, as an unconventional but ideal spot for an open water swimming race. Captured as the "City of Big Shoulders" by the poet Carl Sandburg, Chicago is blessed to reside at the foot of one of the fresh water marvels of the world, Lake Michigan. When you put an accomplished and capable man such as Bill Mulliken together with such an ample resource, you know something good will come of it.  Mulliken passed away in 2014, but his indelible mark on Chicago, the Big Shoulders 5K and 2.5K Open Water Swim Classic, remains.

As Bill was fond of saying, "Big Shoulders is the world's most architecturally significant race." He gathered together the right allies and picked the ideal spot at the foot of the Hancock Tower starting on Ohio Street beach. Serving as a fundraiser for Chicago Masters and UIC Swim teams, Big Shoulders began as a roughwater 5 K challenge of unparalled stature in the midwest. With the backing of the legendary Joe Pecoraro, Captain of the Chicago Parks District lifeguards, as well as the regard of Bill's business colleagues in the city, Big Shoulders launched with a handful of the heartiest and most adventurous open water swimmers in the area. A local celebration of the city skyline had begun, and the message was delivered: Lake Michigan is ready for all comers in the waters just north of Navy Pier every September, the first Saturday after Labor day weekend. 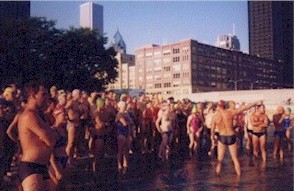 Every dynamic, energetic institution needs a solid captain to go along with the visionary founder. In 1998, Big Shoulders found that leader in the earnest, capable hands of Chris Sheean. Prominent local attorney and consummate family man, as well as tough open water swimmer, Chris has sheparded Big Shoulders from a local phenomenon to a race of national prominence. The gregarious and able leader has grown Big Shoulders from 80 to 1200, while securing status as a Master's National Championship 5K race for the first time in 2000. He's overseen an ever expanding dossier of volunteers, sponsors and safety infrastructure as Big Shoulders enters its third decade.

Big Shoulders had no trouble attracting admirers and the toughest swimmers through the 90s. A race of epic proportions in a world-class city, this local gem has attracted world-class open water superstars, olympians, para-olympians, and a handful of swimmers who decided 5K freestyle was too easy, and opted to swim it breastroke, backstroke, and even butterfly. Meanwhile, the race tripled in size in the wake of such publicity and it was, as the saying goes, "off to the races".

Fresh-water, long distance swimming: an event in a hostile environment at which humans are not supposed to excel, and yet excel they do. While most of Chicago and the sane world sleeps on the first Saturday after Labor Day each year, tough competitors take on Lake Michigan's currents, turbulence and temperature inversions, just for the sake of saying they have "big shoulders". Every swimmer that comes to the Lake that morning, starting with a jittery stomach and swimming with guts, finishes with a personal version of the title "Champion". Think you are made of that kind of stuff? Come join us for the Big Shoulders event: swim, cheer or volunteer -- we just want to see you here!