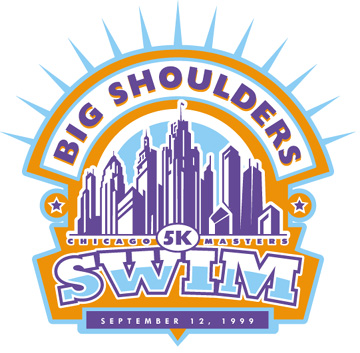 1999 Big Shoulders was Tale Of Two Swimmers -- The Newcomer and the Core. Newcomers pushed the Big Shoulders ranks to the 200 mark, an 80% increase over last year. Swimmers came from as far away as north Ontario and Virginia to take to the waters beneath Chicago's behemoth skyscrapers.

The heart of the story was still being told by the tried and true, the year-after-year regulars, the Core of Big Shoulders. Once again, a terrific job was done by Race Directors Chris Sheean and Kathleen Pisula in coordinating the tremendous volunteer effort needed to run Big Shoulders. Individual friends like Dave Kennedy of the Mayors Office of Special Events, Joe Pecoraro, Kirk Kleist and the lifeguards of the Chicago Parks District, dedicated event volunteers and swimmers from UIC all contributed in their special way to make Big Shoulders 1999 work. Our event sponsors Infolocus.com, ADROC Productions, Kiefer Sports Group, Shamrock Graphics, Balance Bar, Days Inn LSD and Fitness Swimmer kept us humming through the year and added special help on the day of the race. Big Shoulders Volunteers are always the stars of the race, but there were a few other Core stars for 1999.

Once again, Richard Kramer set a blistering pace and taught everyone
exactly what to expect from national champion-caliber swimming. Consecutive victory number four for Richard came in 56:18, and we all enjoyed a foreshadowing of the powerful long distance swimming we will see at next year's U.S. Masters Swimming National Championship 5K Open Water Swim. Meanwhile, Joy Stover took top honors for the females in 1:03:59, a great time on a course significantly longer than last year's.  Naturally, George Wendt once again proved ageless, even age-negative, as he showed us how to good-naturedly achieve tremendous results.

A whole host of Shoulders regulars made this year's race as fun as usual.  The likes of Cathy Grey, Delph Gustitis, John Becker, Russ Hafner (and the list goes on and on) swam, commiserated and helped bring a great summer to a close. Bill Mulliken, Big Shoulders founder and Olympic Gold winner, took on the 5K this year all breaststroke. Tom Boettcher came back to prove last year's all butterfly swim was no fluke, keeping a smooth rhythm and cutting his time by 17 minutes to 1:20.

Unquestionably, the biggest story of all is Big Shoulders itself. The experiments with a 2.5K race and wetsuit division were a big success. Swimmers across the country are hearing about this terrific event. Running concurrently with this years race in national magazine Fitness Swimmer's Sept/Oct 1999 issue is a feature on last year's first-time, all-butterfly swim. Most importantly, Big Shoulders has won the designation as Host of the Year 2000 National Open Water Championship. Finally, this spectacular race takes its proper place at center stage in the national open-water consciousness. What a show it will be next year when the best and the brightest descend upon our pristine yet unpredictable waters. What a way to start the next 1000 years for Big Shoulders, the nation's open water classic in Chicago, the City of Big Shoulders!